↓
Home→Uncategorized→Sustainable energy in Freiburg: power to the people!

I was delighted earlier this year when my supervisors told me an opportunity had come up for me to go on a trip to Freiburg in Germany; an exemplar city for environmental sustainability. They also told me I had to finish a thesis chapter before I went, (which was the bad news) but that’s another story. “I warn you!” said one of them, “you’ll get ‘city envy’! You won’t want to come back!”

We saw lots of amazing things in the city covering all sorts of sustainability areas, but I’m going to go out on a limb and say that my favourites were the bigger renewable energy installations out in the countryside. We visited two farms who had suffered from major international problems in the agricultural industry in recent times; problems that many of our own farmers have probably experienced. One farm had raised pigs and cows in the past; being so high up in the mountains it’s not possible to grow crops for human consumption. After the BSE scandal, the farm nearly went bust. The other was a dairy farm, which had been struggling to survive for years with the price of milk per litre being at least 10c per litre too low to make a living. Both of these farms were run by families who had been farming for generations, who had always made their living from the land. It was more than just a business to them, but a way of life and their inheritance to their children.

These farms have found a way to use renewable energy technologies to continue to get a living from the land. The former beef farm now produces biogas in an anaerobic digester, which digests the milk corn they can grow. They have long term contracts to keep the local school and a number of homes to a certain temperature, and they sell their energy more cheaply than mainstream energy providers. The dairy farm uses a heat exchanger to extract the heat from fresh cows’ milk, which is used to heat their home. They have a 30kW solar PV array on their farmhouse, and they sell wood for use as heating, and their own home-made schnapps (delicious!).

We also visited some wind turbines up on the top of the mountains overlooking the city and these farms. One of these was a huge 2MW turbine that couldn’t be seen on a cloudy day; it was so high up it got lost in the clouds. It took a while for me to realise that the aeroplanes I thought I could just about hear flying overhead (with surprising regularity) were actually the turbine’s blades going around. What inspired me most about these turbines was that they were actually owned by local people. Just under 200 people from the local area and the city of Freiburg itself had raised a third of the money for these turbines, with the rest coming from banks.
Freiburg was full of stories like this of people participating in their sustainable future. ‘The city wanted to do this, but the people said no’ was a common refrain from our tour guide! People didn’t want old buildings in one neighbourhood to be taken down, and helped to show that it was cheaper to renovate them instead. People had campaigned against nuclear energy in the 1970s when the whole region was earmarked as a nuclear ‘hub’, and helped set Freiburg on the sustainable energy path it’s on now. People owned a stake in the energy they used. It was an inspiring place! 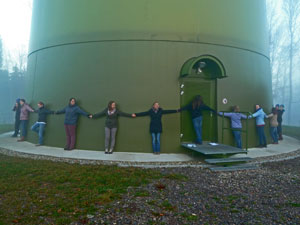 Despite my supervisor’s warning, however, I didn’t have city envy, and I did want to come back. I love Birmingham and believe that it could one day be as sustainable as Freiburg. In one way, CORE 50 is contributing to this change. CORE 50 is planning a number of renewable energy projects across the city that ordinary people can buy into, and co-own with other members of the public. Through renewable energy co-ops like CORE 50, we can all have a stake in our own energy, instead of being at the whims of the Big Six. We can be in charge of our own power!