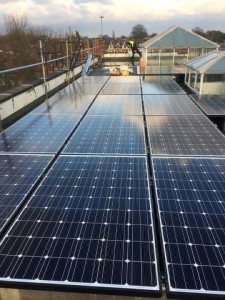 Why have the two solar arrays at Moseley Exchange performed differently in 2016? The latest readings show that the main roof performed better during summer but the rear roof better in the winter months – read on to find out why…

The output of the panels will be the outcome of a number of factors; the inclination and orientation of the panels, the season and the time of day.

Summer. The sun is higher in the sky in summer than in the winter months. This means that the flat array presents an inclination to the sun which is greater i.e. nearer to 90o than the inclined panels. Flat panels should produce more in summer than inclined ones.

Winter. The sun is lower in the sky, so at a low angle to the flat array, but the inclined array will present a steeper face to the sun’s rays, and will therefore be the more effective at generating.

The flat array always faces the sun, if sun is above the horizon, and it will produce equally wherever the sun is coming from.. The inclined panels however face one fixed direction, in this case southwest. If the sun is early or late and not from this direction, then the output of the panels is reduced.

This effect of orientation compounds the above effect of inclination to make the flat array perform the better in summer, but the inclined array the better in winter. Readings on the two roofs at the Moseley Exchange in 2016 have confirmed that this is true.

The orientation also affects when maximum output occurs. For the flat array this is when the sun is south i.e. at noon, but for the inclined array since it faces the southwest, which is direction of sun in afternoon/early evening, it has a later time of maximum output. The latest output i.e sundown will be later for the inclined panels which face the setting sun. The earliest output in the morning will be from the flat array.

The conclusion is that the different outputs of the flat and inclined arrays will complement each other through the seasons and the hours. Total output should be greater than if all were flat, or all were inclined.