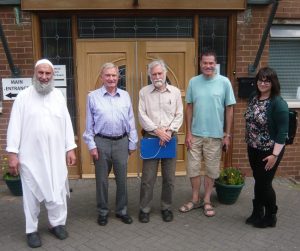 At the roasting start of July two CEB directors, John Newson and Claire Spencer, led a walk to visit some community buildings that have solar panels. The walk took place during Community Energy Fortnight and the Moseley Festival. We were greeted at the Old Post Office building by Fiona Adams of Moseley Exchange, who explained how they benefit by the cheap electricity from the two solar arrays there, which belong to CEB. The next stop was St Mary’s parish church, where John Dowell who is a former churchwarden, showed us the display inside the church of all the power produced over 6 years, since the panels were installed by British Gas. That was part of their Green Streets programme, which had been won by Sustainable Moseley and it also paid for panels at the Hamza Mosque, where we arrived to be shown around by Saifer Rehman. He had a most interesting story to tell about solar generation, with LED lights to cut consumption, and a range of water saving methods, as well as cycle stands put by the main entrance. We agreed that there is one sun for everyone and all can benefit from using renewable energy!